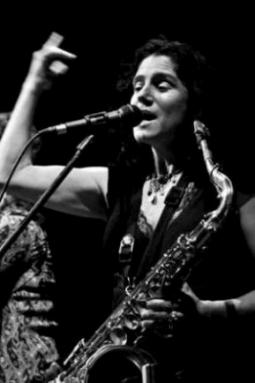 Jessica Lurie is a multi-instrumentalist performer, composer, producer, teaching and recording artist, based in Brooklyn, NY and Seattle,WA. She has been a member and co-leader of the Tiptons Sax Quartet since 1993. She leads her own band, and co-leads the Tiptons Sax Quartet & Drums, the Living Daylights trio, Sephardic group Sofie Salonika, Ethiopian-inspired jazz group Freethiopiques and the improvising Slingshot duo. She is a Sundance Composers’ Fellow, regularly nominated in Downbeat’s “Rising Star for Alto Sax” poll, most recently in 2016-18 and 2021.

Despite pandemic restrictions on touring, Jessica has been hard at work creating new music performances and collaborations, including “Shofar Meditations” (Brooklyn, NY, Oct. 2020), “Mujer O Bruja” with the Tiptons Sax Quartet (Seattle, WA, Oct. 2021), and being a core performer in Taylor Mac’s “The Hang” (Jan.-March 2022). She is known as a composer and performer for her love of exploring a wide range of musical influences, including folk, funk, rhythmic Eastern European folk music and improvisation-heavy jazz with a dose of free-wheeling avant-groove-meets-grind.