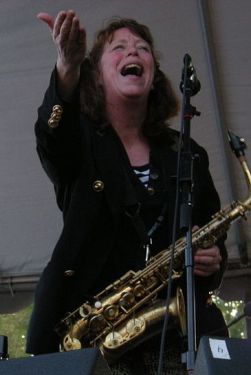 Inducted into the Seattle Jazz Hall of Fame in 2015, Amy Denio is a founding member of the Tiptons. She is a composer, singer, multi-instrumentalist, record producer, and international collaborator. She started her own label, Spoot Music, in 1986. Her main instruments are voice, accordion, saxophones, clarinet, electric guitar, and bass, and she makes field recordings. She has collaborated with musicians and artists on 5 continents, and has produced 45 CDs. She has played concerts in N. America, Brazil, Argentina, Bolivia, Japan, Hong Kong, Taiwan, India and throughout Europe, Turkey and Russia. She composes sound tracks for theater, film and dance, and works with choreographers such as Pat Graney, Li Chiao-Ping, and Victoria Marks.

In 1997 she received a Bessie Award for her work with David Dorfman. Her music has been performed at the Venice Biennale in Italy, at the Brooklyn Academy of Music, Carnegie Hall in New York, and at the New Year’s Eve celebration in Napoli in 2006, accompanying a French aerial circus.